While making this slideshow I realized we purchased the 8×22′ trailer that our house sits on February 25, 2014.   July 16, 2014 was the day we pulled it from Eugene to Portland where we now live.  It is amazing what you can accomplish when you have no other option. We decided the best way to make this dream happen was to allow ourselves no other option.  It was Tiny House or the streets.

Let me back-up a bit…Portland has been our home for the last 7 years, but in 2013 Adam was hired by the Fire Department in Eugene, OR, it was an exciting opportunity coming from a smaller Department outside of Portland and he took the job.  During the first 6 months I stayed in Portland but eventually moved down too.   Though we didn’t plan it this way, the house we rented was an ideal situation for building the tiny house.  We started building it with the goal of finishing the following winter.

Adam was building on his days off and I would help when I was able.  In June he got offered a fairly unexpected position with Portland, a month before he would need to start.  It was not an easy decision, he loved the people he worked with and it meant another dreaded fire academy along with canceling our big trip to Peru we had booked in September. Portland felt like home to us and this had been his dream job for years so he couldn’t pass it up.  This meant we had 30 days to either finish this house or find a place to live.  We decided this would be the perfect year to live full time in the house, he would be busy with academy and we would save money, plus where the heck would we put a half finished house.  At first we looked at places as backup and quickly decided we were not going to consider anything else because it was distracting and didn’t get us any closer to the end goal.

I am good under pressure, I do my best work in -fact, but this was a whole new level of pressure.  Not only was the house just a wooden shell with no insulation or electricity but we had no idea where we would put it in a month when we moved it to Portland.  We would joke about the Wal-Mart parking lot or parking it down by the river but even those were looking like real options two weeks before the move. Adam was working from the second he got up until late at night, on days when I was home I would do the same, friends would help out some days.  We were making progress.  My family came down for the weekend and my uncle ended up staying the entire last week working as an unpaid saint sent down to help us not be homeless, don’t think we would have been here without him!

One week until our move date, I was in Utah for work, Adam doesn’t panic and he was panicking.  I told him “if you build it they will come” He may not have been amused by the Field of Dreams reference at the time but I truly believed I would find us the perfect spot in less than a week.  It was the least I could do while he was  working around the clock to finish while I was away for work.  Calling him with the news that I found a place was exciting, but the fact that it was  basically in our old neighborhood and on a half acre right against a 90 acre park was a proud moment.

I know many people living in tiny houses spend months downsizing, unfortunately  with the unexpected move and desperate need to finish the house we had not gotten to this step, or even began packing our 1,400 square foot house at all until the DAY BEFORE.  Moving is already a pain but this move will make all stressful moves feel like a sunny picnic in the park.  It was one of those times you look back on and don’t know how you did it.  There is the sheer terror of taking your 10,000 lb home down the freeway for the first time without knowing if it would fall apart.  There was also the fact that after two solid days of no sleep Adam would be starting his new job.   It wasn’t pretty but we did it and for that we are grateful.

It has been five months already and living here has been the easy part.  It has never felt too small, even when we bump into each other in the kitchen or hit our heads in the loft. Despite all of its flaws and extreme tiny-ness this house feels like home to us.  It surprises me everyday how much I love living here. 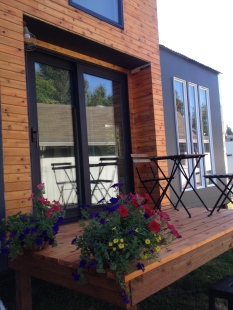 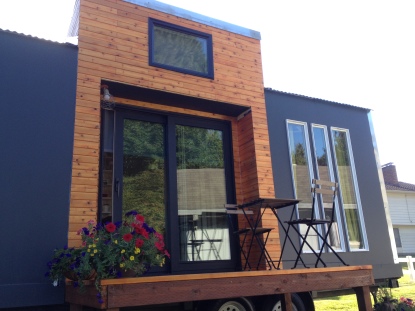 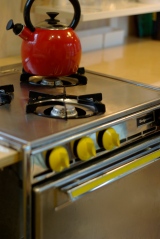 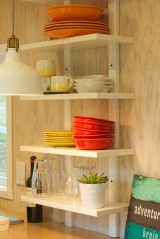 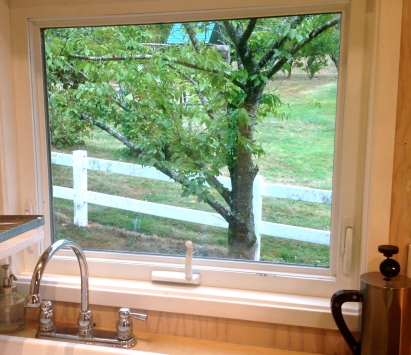 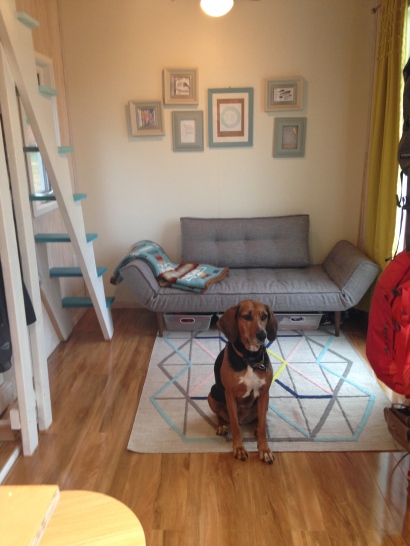